Interview with a Competitive Plowmen

Tom Evans, competitive Plowmen and Britespan team member, talks to us about the upcoming 2016 Canadian Plowing Championships, and how he plans on taking home the winning title.

Britespan Building Systems Inc: How long have you been plowing, and how did you get involved in competitive plowing?
Tom Evans: 27 years. I started young. My father and I had an antique Massey Harris tractor and plow and got invited to come out to the Bruce County plowing match. I went every year for a long time and then started going to several matches a year on my own when I got my first truck. Eventually I competed in the antique class at the International Plowing Match. I won reserve champion in my class at the 2006 IPM at Peterborough. The next year I made the switch to using a brand new reversible plow and competed in the Ontario Championship class ever since.

BBS: What has lead you to this point of competing in the upcoming 2016 Canadian Plowing Championships?
TE: After many years competing against the best in the country, I won the Ontario Championship at the International Plowing Match last year in Finch. I also took the top honours for the highest scoring competitor in all classes. The top two competitors from Ontario advance to the Canadian Championship where they compete against plowers from the other provinces.

BBS: We understand you plan on taking home the winning title?
TE: Well, yes of course. I will give it my best as always. I know that it is not beyond me. If I can do my best, I feel confident that I will be right there. I have been out practicing several times this year and will be going to three competitions prior to heading to Ottawa for the national event. So I should be ready.

BBS: What’s next after the Canadian Championships?
TE: If I end up winning, there will be a lot of planning and fundraising to go to the 2017 World Plowing Championship which will be held in Kenya in December of next year. The Canadian team usually arranges to borrow equipment in the host country, which is usually in Europe. Kenya does not have any equipment to borrow. So by necessity, we will have to ship a tractor and plow there for me to use. Also, I will be competing at the International Plowing Match at Harriston this September and trying to win another Ontario Championship. 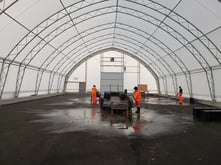 The Advantages of a Fabric Structure
July 19th, 2019
In Britespan Blog 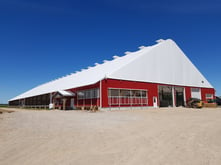